Based in London and Suffolk, Mark works in a wide range of media from painting, drawing and printmaking, to large-scale architectural and ecclesiastical projects in stained glass and other materials. He has also produced images for several limited edition books, listed below.

His paintings often reflect his experience of the city in which he lives, from the parks, cemeteries and playing fields to the canals, gas installations and flyovers of West London. His pictures are evocative and personal responses to an urban landscape that becomes almost pastoral; a promised land of quiet havens and open spaces. In contrast, towering concrete and metal structures are rendered with a dynamic, cathedral-like elegance.

Mark’s work can also be viewed on www.markcazalet.co.uk 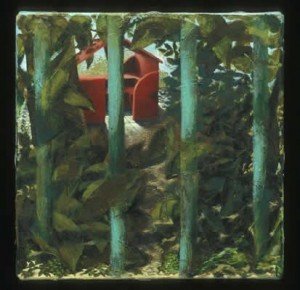 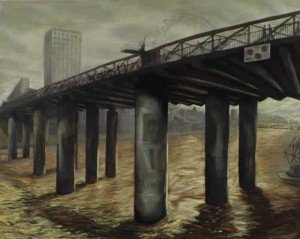 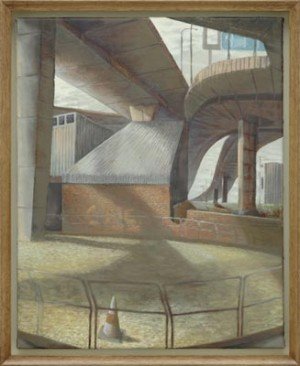 Cathedrals of Industry
Museum of London, 1998
Text by Mark Cazalet 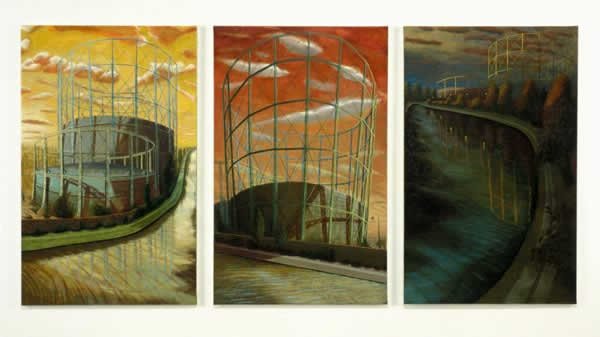 Visitors are welcome
at other times by appointment

X
About the Gallery 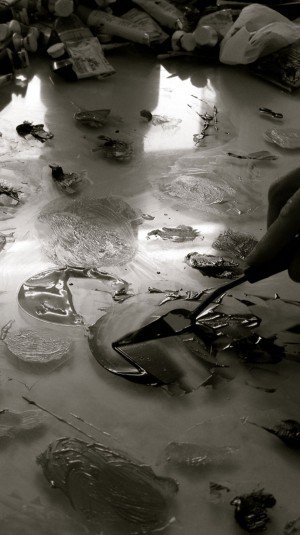 The Padstow Studio is an artist-run space, opened in 2006 by the landscape painter Sarah Adams, whose studio occupies the second floor of the building. The gallery below exhibits Sarah’s own work and that of a circle of friends, artists who she has studied with, shown with or shared studio space with over the years.

The gallery exhibits a constantly changing selection of contemporary paintings, drawings, ceramics and works in bronze, and aims to give visitors the opportunity to engage with and follow the development of individuals who interest them.

Not everyone the gallery shows is based in Cornwall, and most of the group are also represented by well-established galleries elsewhere. For further information about individual artists, please click on their names, and follow the links to their own websites.

We accept most major credit and debit cards, cheques and BACS transfers.

Although the gallery is not part of a formal hire purchase scheme, we are always happy to discuss purchase by installments, should that be required. All works are safely stored at the gallery until the balance is paid.

Small and medium size works can generally be carried away at time of purchase. We are also happy to pack and send small pieces by Royal Mail Special Delivery at no extra charge.

Large and medium works can be delivered a specialist art carrier. We cover the cost of most deliveries within the UK mainland if the purchase price is over £1,000 (excluding some parts of Scotland). 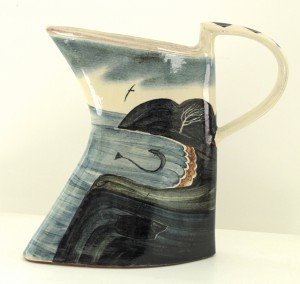 James Campbell graduated from the Royal College of Art in 1964. His ceramic pieces have been widely exhibited, and he is represented in major public collections in the UK, Australia and Japan. ‘A pot decorated with a drawing is something of a paradox. They have different terms of reference and are in different languages, and bringing them together in a way that works is an exciting challenge. I try to make the form strong enough in its own right to hold the drawing, to be muscular and even dynamic. too much movement, however, would make it an incompatible partner, so there is a balance to be struck. The drawing must not overwhelm the shape, but at the same time it must have a content of its own and be more than decoration.’
X
Mark Cazalet 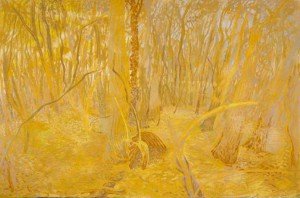 Mark Cazalet is based in London and Suffolk, and works in a wide range of media from painting, drawing and printmaking, to large-scale architectural and ecclesiastical projects in stained glass and other materials. He has also produced images for several limited edition books. His paintings often reflect his experience of the city in which he lives, from the parks, cemeteries and playing fields to the canals, gas installations and flyovers of West London. His pictures are evocative and personal responses to an urban landscape that becomes almost pastoral; a promised land of quiet havens and open spaces. In contrast, towering concrete and metal structures are rendered with a dynamic, cathedral-like elegance.
X
Kit Surrey 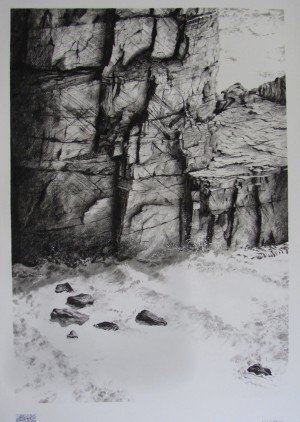 Kit Surrey is an artist and freelance theatre designer, who has worked with many major theatre companies, including the RSC, Sheffield Crucible and Bristol Old Vic. His fine art practice explores significant landscapes through drawing, particularly in places he loves to walk or climb. He has been among the prize winners at the Society of Fine and Graphic Arts a number of times.
X
Paul Thomas 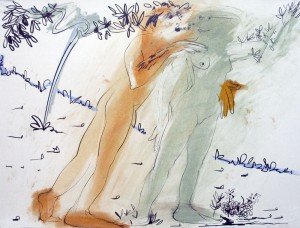 Paul Thomas currently divides his time between Australia and Europe, exhibiting and lecturing. The work he has been making reflects this cultural diversity in drawings and paintings that explore shared mythologies and narratives. Having recently finished a series of drawings that dealt with Homer’s Iliad and Odyssey, he is now working with the diverse flora and fauna of Australia. He has also published several artist’s books.
paulthomaspaintings.co.uk
X
Chris Thomas 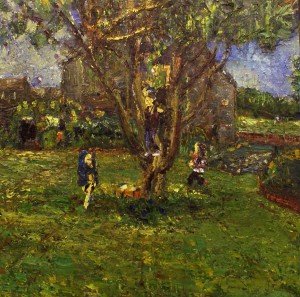 Chris Thomas was one of only six finalists shortlisted for this year’s Columbia Threadneedle Prize, the most important national award for representational painting. He is a true painter’s painter, hugely respected by his peers. His home on the North Cornwall coast has dominated his work over the past 40 years, making paintings of his family, corners of the garden, surrounding fields, cliffs and the sea in all weathers and seasons, using a rigorous observational process.
christhomas.info
X
Anita Taylor 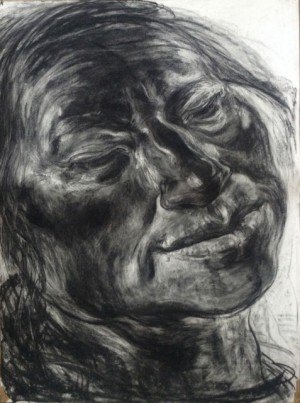 Anita Taylor is an artist, educator and exhibition organiser, currently Dean of Bath School of Art & Design at Bath Spa University and Director of the prestigious Jerwood Drawing Prize.  Her work is figurative, and explores identity, emotion and narrative through tableaux and interactions which are at once highly theatrical, but also intimate and symbolic.  The recipient of many awards and prizes for painting and drawing, she has taken on increasingly demanding academic roles while still actively pursuing her own studio work.
drawingprojects.co.uk
X
Alison Pullen 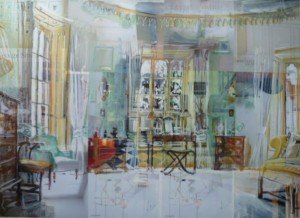 Alison Pullen studied Illustration at the Royal College of Art, and has exhibited widely in the UK and abroad. Alison is particularly known for her collaged interiors, from contemporary domestic settings to public spaces and stately homes, and she completed a one year residency at Osterley Park House, which remains a favorite subject.
alisonpullen.com
X
Michael Porter 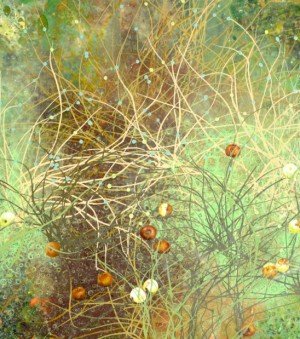 Michael Porter is a landscape painter whose work concentrates primarily on fragments of earth beneath our feet. They often incorporate many layers of paint giving the impression of looking through and into undergrowth, highlighting various aspects of nature that are so often overlooked, the odd feather, a collection of stones or fallen leaves. There is a sense of discovery in the work, objects reveal themselves slowly as one scans the surface and gradually becomes aware of the literally painted objects concealed under layers of paint.
michael-porter.co.uk
X
Philip Naylor 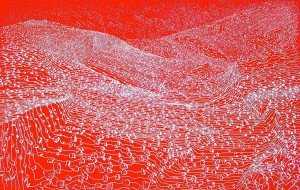 Philip Naylor is Senior Lecturer at University College Falmouth, Program Leader Foundation and Award Leader BA Drawing. He studied under Tim Mara as a postgraduate at Chelsea School of Art, and has exhibited widely nationally and internationally. He makes drawings and etchings about landscape, and is particularly drawn to edgelands, reconstructing the landscape with contour lines, geological references and artifacts. ‘I look for sparse areas with ambiguities of scale, places that raise questions about spatial perception and our relationship with open spaces, reclaimed and re-lost marginal land where struggles with nature take place, rocky and reluctant landscapes, eroded areas showing their underlying histories.’
X
Anne Howeson 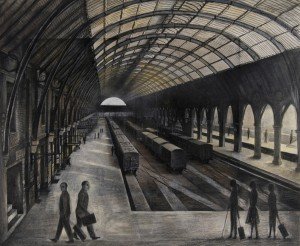 Anne Howeson studied at St Martins School of Art and the RCA, and currently lectures at the RCA. Based in London, the main focus of her work is urban, weaving historical records and images and her own experience of the city into atmospheric drawings that bring past and present together. Anne is a Jerwood Drawing Prize winner, and has exhibited widely.
annehoweson.com 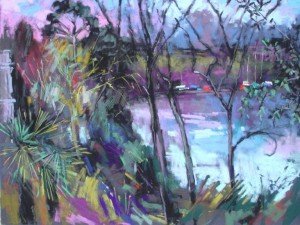 Lynn Golden trained at St Albans School of Art before moving to Cornwall in 1976, where the effects of light and weather on coastal landscape became the focus for her work. Particularly known for working in pastel, she makes many of her pieces on site. Still life pieces, and larger acrylic paintings are produced in the studio. More recently, Lynn has experimented with metal leaf, egg tempera and other media on board, extending her exploration of light, form and composition.
lynngolden.co.uk
X
Mo Farquharson

Mo Farquharson is well known for her sculptures of people, animals and birds. Beautifully observed, they have a warmth that communicates the character of her subjects in an engaging and often playful way. Context is central to her work, particularly in the figurative series where, centered around a park bench or bus stop, the attitude and preoccupation of each individual is explored. The same sympathy and attention to detail is applied to Mo’s wildlife pieces, rendered in a style that is natural and spontaneous, but always carefully considered. She generally casts her work in bronze, in small editions (of generally no more than 7 pieces) using the lost wax process.
mofarquharson.com
X
Rosalind Eastman 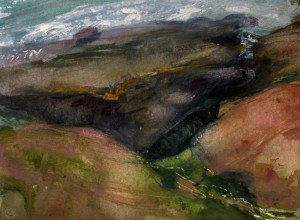 Rosalind Eastman studied Fine Art at Reading University, and was awarded a David Murray Landscape Painting Scholarship from the Royal Academy in 1969. She met her husband, the painter Chris Thomas, when they were students at Reading, and they moved to North Cornwall a couple of years later.  Her paintings document the coastal landscape around her home, an environment she has come to know over the past 45 years.
X
Rachel Budd 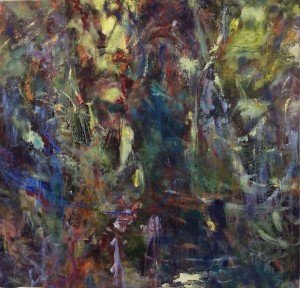 Rachel Budd graduated from the Royal College of Art in 1986, and has won a number of awards, including the Henry Moore Prize at the London Group Show and the Mark Rothko Memorial Trust Fund.  She generally works in oil on canvas. ‘My work can be seen as a diary, depicting little snippets of colour and detail which come to rest in my head. Often I am unaware of their presence until I paint. Since moving to Cornwall a year ago, my focus (both detailed and broad) is daily renewed by my surroundings. I am inspired by windy skies, ever changing light on ever changing ochre and green hills, and where the sea meets the sky.’
X
Kim Bentley 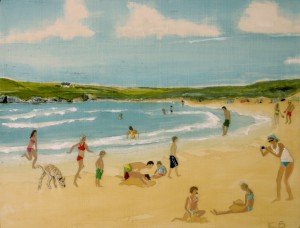 Kim Bentley co-founded the design partnership Bentley & Spens, with Sally Spens, shortly after they graduated from Goldsmiths College. Their work is represented in the V & A Museum, and they have created fabrics for many other fashion and interiors collections, including Paul Smith and Liberty. Kim’s textile pieces are now inspired by people-watching on the beach, and combine embroidery and fabric paint on a silk taffeta base. Kim is based in Padstow, and often sits in the gallery, stitching away behind the desk. 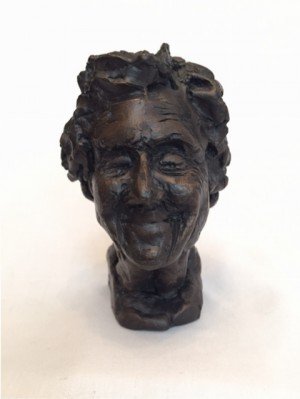 Sue Beattie is based in Assen, in Holland. Working directly from the figure, her pieces are beautifully observed and sensitive studies, initially worked in wax then cast in bronze by a lost wax process. Sue often works within a group of sculptors, regularly sharing a model and studio space. This has been a very productive working atmosphere for her, and has led to an increasingly complex and ambitious use of the figure in her work.
X